The “GREAT” and mighty Nervous System…or The BRAIN as most of us call it.  What makes this organ unique is that within it lies the ability for Humans to know oneself.  This feature distinguishes and sets the Human species apart from the rest of creation.  This ability is known as “Consciousness or “Intelligence”.

To begin, let’s look at the primary function of The Nervous System. The basic purpose is to coordinate all of the activities of the body. It enables the Body to respond and adapt to changes that occur both inside and outside the body. 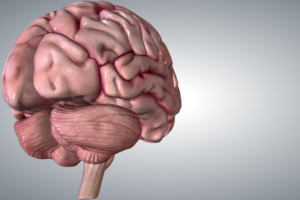 The Central Nervous System is made up of two major structures.

As most people know, the brain is found within the cranium or skull; and there are six main sections among other structures within it.

These six sections are the Cerebrum, Cerebellum, Diencephalon, the Mid-brain, Pons, and the Medulla Oblongata.

The first section is the cerebrum. This is the largest section. It is divided into two major hemispheres which are the right and left hemisphere; and the cerebrum is further divided into four Lobes. These four lobes are the frontal, the parietal, the temporal, and the occipital.

The second section of the brain is the Cerebellum. This is the section located in the back of the head below the cerebrum and above the 1st cervical of the neck… It is responsible for muscle coordination, balance, posture and muscle tone.

This section is found between the Cerebrum and midbrain.  It contains two structures:  The thalamus, and the hypothalamus

The midbrain section is located below the Cerebrum at the top of the brainstem. It is responsible for certain eye and auditory reflexes.

The Pons is located below the midbrain and in the brainstem. Is responsible for certain reflex actions such as chewing, tasting, and saliva production.

And the last section is the Medulla Oblongata. It’s the lowest part of the brain stem. It connects with the  spinal cord and is responsible for regulating heart and blood vessel function, digestion, respiration, swallowing, coughing, sneezing and blood pressure. It is known as the center for respiration. 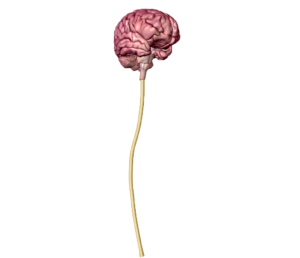 Now that we’ve covered the brain, let’s take a look at the other half.  The Spinal Cord.

The spinal cord is the link  between the brain and the nerves in the rest of your body.  The spinal cord is divided into four different regions: the cervical, thoracic, lumbar, and afferent and efferent spinal nerves, which merge to form peripheral nerves. 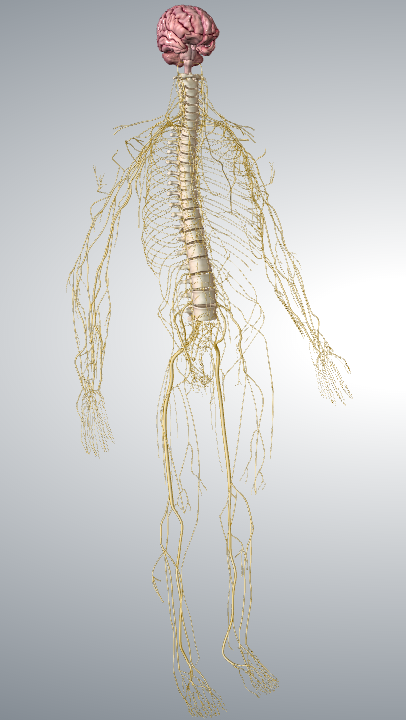 Within this elaborate system of nerves , neurons,  and dendrites there is a system that regulates the functions of the CNS which lie outside its major components such as the brain and the spinal cord.

This  system is Known as the Peripheral and is subdivided into two smaller systems.

The Somatic System is responsible for carrying motor and sensory information both to and from the CNS. This system is made up of nerves that connect to the skin, sensory organs, and all skeletal muscles.

The somatic system is also responsible for nearly all voluntary muscle movements, as well as for processing sensory information that arrives via external stimuli including hearing, touch and sight.

The structures that allow this communication to happen between the nerves throughout  the body and the CNS are known as the Afferent sensory neurons and the Efferent Motor Neurons.

and the efferent neurons take information from the CNS, to the muscle fibers throughout the body.

At this point you should have a basic understanding of the Nervous System. But lets do a quick recap.

So, as you can see, the Nervous System is quite complex,  and this is just the tip of the iceberg so to speak.

Look for more videos at CTEskills.com