Measurement and control of process variables within a production, or manufacturing area is defined as Instrumentation. An instrument is a device that measures and/or regulates physical quanity/ process variables such as…

Instrumentation plays a key part in the automation of modern day process operations. There are many variables that need to be monitored by instrumentation. The first one we will cover is temperature measurement. 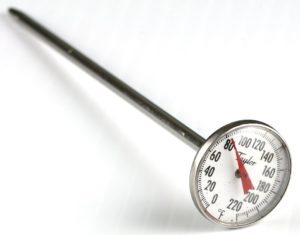 Temperature is the measurement of warmth or coldness of an object or substance with reference to some standard value. Two scales are commonly used: Celsius and Fahrenheit. Fahrenheit references the freezing point of water at 32 degrees and the boiling point 212 degrees, while Celsius, uses zero degrees as a freezing point and 100 degrees as its boiling point. This works with a Bi-Metallic Strip or element such as Mercury which will physically react to change in temperature. In industry however, the most common thermo-measuring devices are thermoelectric.

There are two types of these devices: Restive temperature detectors (RTD’s) and thermocouples. RTD’s use an element in it that has a predictable change in resistance at different temperatures. An electronic circuit senses the changes and displays it on a temp. indicator. A thermocouple converts heat into electricity. A low level current is generated by the heat applied to the connected ends. As the level of heat rises, so does the current. Again, an electronic circuit detects this and converts it to a corresponding temperature scale. J and K type thermocouples seem to be the most widely used with K typically being preferred for higher temps.

The primary pressure elements are what detect changes in pressure and convert it to mechanical motion. There are three types of elements: Bellows, Bourdon Tubes, and Diaphragm Capsules. A bellows pressure element consists of an bellows, a spring resistance, a pressure inlet, mechanical linkage, and a pointer. Bourdon tubes are the most common type of pressure element and come in a variety of different shapes such as C-Type, Helical-Type,and  Spiral-Type. They all operate in sort of the same way, they just have different shapes to them. The pressure inlet is attached to one end of the tube, a mechanical linkage connects the other end of the tube to a pointer, changes in pressure will cause the tube to contract and expand, which causes the pointer to move respectively. A diaphragm is a flexible membrane. When two are connected together, they form a container known as a capsule. The diaphragms are normally metallic. Pressure inside the capsule causes it to expand and produce motion through its axis. A pressure transmitter is a device that sends a signal from the pressure element, to the controller or recorder. A controller is used to open or close valves depending on the signal it receives from the transmitter. 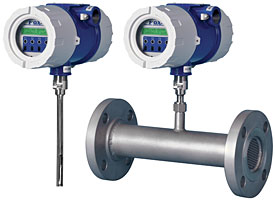 A flow transmitter uses a differential pressure cell to measure the difference in the inlet and outlet pressure then sends the reading to a controller. The signal sent to  the controller will determine weather or not the valve will be opened or closed. These pressures are measured by a variety of meters. 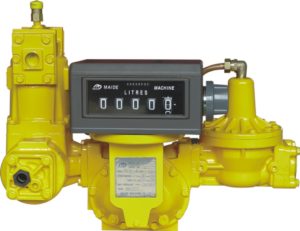 A notating disk is a type of positive displacement meter. The disk spins around, similar to a spinning top. The fluid flow rotates the disk. As the disk turns, it rotates a set of gears which control the counter. Another type of displacement meter, which is similar to a load pump on the inside, is an oval gear meter. The flow rate is calculated by the rotation of the gears. A rotameter has a tapered or cone-shaped tube. Inside it, consist of a ball or a float which keeps a constant restriction to the flow. The higher the flow rate, the higher the balls rises in the tube. A turbine flow meter uses the mechanical action of a turbine placed in the flow. This action is translated into a flow rate, such as gallons per minute. The number of rotations is calculated into the amount of fluid or flow rate. To calculate flow rates in an open channel, a weir and flume design is used. A weir is a type of dam, which restricts the flow and forces the level to rise. The level of flow correlates with the flow rate. A higher level equals a higher flow rate. A level measuring instrument at the inlet will the translate the level into a flow rate.

Direct level measurement uses devices that make physical contact with the surface of the fluid. A few examples of this include sight glasses, floats, displacers, and probes.  Pressure change is used to indirectly measure levels. Differential pressure is then converted into level readings. The hydrostatic pressure in a vessel is measured at two different levels and the difference in the two (DP) is then calculated to find the level.